Discover playfully the world with Puky

For generations, Puky has stood for high-quality children's vehicles, which strengthen the children's confidence and offer them to discover the world - playfully and mobile. More than 60 years of experience in development, design, and production are significant factors for the international success of Puky toys. Being one of the market leaders with respect to high-quality children's vehicles, Puky knows how to meet evenly the requirements of children and adults with highest safety standards and a colourful design suitable for children. The aim of Puky is to support the independent mobility of children and to train important characteristics like the sense of balance. Order the Puky product of your choice in our shop for playing equipment - at an affordable price and comfortably.

Puky - All categories in an overview (6)
When developping its vehicles, the traditional manufacturer of children's vehicles thinks its way into the world of children: How should be the design of a balance bike, a scooter or a bicycle for children? The result are vehicles suitable for children, which are reduced to the very essential. They support the child without demanding too much due to too many details. After the parents had safely accompanied the first attempts on the new playing vehicle, children are able to control mostly intuitively the vehicle.

Children love to discover the environment on a tricycle, a balance bike or a GoKart. Many Puky vehicles like the red-yellow scooter have become real classics. Puky copmletes its product range by well-thought out product series, which fulfill the needs of modern families - for instance, the practical urban combi equipment Puky Ceety.

The concept of success of Puky: Safety, quality, and design suitable for children

Puky playing equipment is saef, sustainable, and suitable for children.

Puky sets standards with respect to safety, sustainability, and quality of children's vehicles. With a Puky playing equipment, your child moves easily, because all vehicles combines highest safety standards, high-quality materials, and a careful workmanship. Each playing vehicle is equipped with the safety set of Puky. It includes nonslip handles and pedals or footboards as well as handlebar pads. That's how Puky makes the first independent attempts of children to drive as comfortable as possible.

Puky playing vehicles have not only been developed in Germany but also produced since the company foundation. Thanks to the product quality „Made in Germany“, they offer a very long duration of use. That's why it's not only one child who enjoys the Puky children's vehicle: The balance bike, the tricycle or the bike can also be used by younger siblings. Puky addresses consciously against the throwaway mentality with its approved quality, the comprehensive spare-parts' service, and the high resale value of its playing vehicles.

Puky has also thought of the needs of children regarding the design: Puky children's vehicles are equipped with a classic design which is also suitable for children. Besides the classic red-yellow playing vehicles, there are sliders, tricycles, and balance bikes in many vivid colours, which make a lot fun even when you look at it and which increase the anticipation for the next outdoor tour. Little children love to go on a discovery in the fresh air with the motives of the cute Princess Lillifee and the notorious Capt'n Sharky.

The range of Puky playing vehicles

Puky accompanies your children from the first own playing vehicle to the bicycle with age-appropriate playing equipment which grows with the user. That's how adults and children can use the approved Puky quality for many years. Being adjusted to the respective phase of development of the child, it learns step by step to train the sense of balance, to coordinate courses of motion, and to develop a sense for speed, steering, and braking with a Puky vehicle. 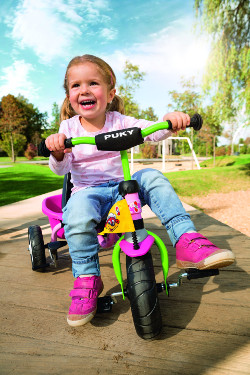 For children from the age of approximately one year, Puky offers four-wheeled sliders, on which the very little children can gain first experience with a children's vehicle. The Puky sliders Pukylino and Wutsch of the series „My first Puky“ make the start in the children's mobility very easy. Small children can train the pushing with legs as well as first steering movements while the four wheels provide safety. The leg muscles get strengthened and hence the children starting to walk are supported to learn a safe walking.

The difference between both sliders is their use and is also based upon the phase of development. Pukylino is an indoor vehicle for children from the age of approximately one year or a height of 75 cm, for which the child should be able to stand and walk with an aid. Hence, it is the perfect starter model of the Puky series and it is ideal to get to know the new course of motion in the safe environment of the apartment or the house.
However, the Puky Wutsch can be used indoors and outdoors, i. e., in the garden or on the way to the playground. It is recommended for children from the age of approximately 1.5 years or a height of 80 cm, who can already stand and walk without any aid. Besides the steering and leg movement, the Wutsch also trains the balance due to its geometry. It makes it an ideal preparation for the balance bike.

A Puky tricycle – the alternative to a Buggy

Adults know: The child is driving with its tricycle but wants to sit in the buggy after half of the way - however that one is at home. For such situations, Puky has found a smart solution: The model Ceety combines a tricycle with the essential functions of a buggy. In the play mode, the Ceety can be used as tricycle by steering and pedalling. It can be quickly changed to the City mode - the child gets fastened and is pushed by means of the pushing rod. The feet rest on the foot rests and the child is optimally protected, when it is tired or the side of the road needs to be changed. In addition, the sporty-urban design also includes a bag and a case to store little shoppings.

Of course, besides the Ceety, Puky also offers classic tricycles - all of them are equipped with a practical pushing rod. The models with tipping trough are popular - here the sand toys or collected treasures can be placed.

On the road on two wheels with the Puky balance bike

The Puky scooter – the classic among the playing vehicles

The scooter belongs to the first chidlren's vehicles of Puky and has made the company worldwide known. Being a timeless classic of the Puky range, the scooter specifically trains the sense of balance, which is also important for cycling and which strengthens additionally the leg muscles. Puky scooters are adjustable in the handlebar's height and are equipped with all important safety features (handlebar pad, nonslip footboard and handles). The scooter models are adapted to the respective phase of development of the child. The R 7 L for children from the age of approximately five years, for instance, is equipped with pneumatic tyres, handbrake and side-kickstand and prepares ideally for cycling.

Driving an onw little racing car: This wish comes true for children - with the GoKart. The Puky GoKarts for little junior racers are sturdy, have a sporty design, and convince by excellent driving features. Just by the way, the strength in legs, cardio, and coordination are playfully trained. Thanks to high-quality tires, the child can go on adventure tours across the country. Adults can remain relaxed during a race across the park, because the stable design of the Puky GoKarts ensure safety of the little racers. The freewheel automatic, i. e., avoids that the pedals keep rotating when the child stops pedalling. Choose the appropriate GoKart for your child from different sizes as well as optionally plastic or pneumatic tyres!

When the child is too big for the balance bike, it is time for the first own bicycle. Of course, that's available at Puky with a comprehensive safety set: backpedal brake, brake lever suitable for children, and ball-bearing wheels.
The unicycle is a great addition to the bike. Cycling a unicycle is not only fun but presents a very special challenge of the sense of balance. Puky unicycles are equipped with a height-adjustable telescopic seat post, nonslip pedals, and trend tires for the indoor use. That's how stunts can be perfectly trained at the gym. 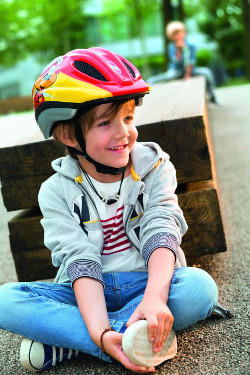 Most important accessory: the helmet

Puky offers the appropriate accessory for an extra portion of safety, comfort, and fun to cycle - from bells to handlebar basket. A helmet should definitely belong to the equipment of the child. In addition, the shoulder strap is also practical to carry comfortably the balance bike on the shoulder home.

The outline that Puky designed already 60 years ago, is now more relevant than ever: Movement supports the individual development of your child, because the training of motor skills goes along with the maturity of mental and social skills in every phase of age. Puky supports thehe long-term experience in the production of well-thought out children's vehicles in cooperation with movement therapists, paediatricians, and pedagogues. Adults support playfully the natural compulsion to move of their children with a Puky children's vehicle.

Puky in the test

When purchasing a children's vehicle, many parents are oriented towards current tests: How does the model comes off in the field test? Which children's vehicle has the best price-performance ratio? Is the playing vehicle pollution-free? Being a manufacturer of children's vehicles, Puky models are regularly examined carefully. For instance, the Puky balance bike LR XL convinced in the balance bike test of the journal Ökotest: Balance bike test of the journal ÖKOTEST (ÖKO-TEST Jahrbuch Kleinkinder für 2014 - yearbook small children for 2014) PUKY balance bike LR XL with brake: test rating "good": "In the practical test "very good" children's balance bike from Germany, which is delivered pre-assembled. The deep step-through frame makes getting on easier, extra-wide pneumatic tyres provide a lot of fun on any road. The XL size weighs more - it doesn't matter, because the bicycle is meant of taller children. Practical: Due to the footboard, it can also be used as scooter." (translated)

The history of the company Puky: Since more than 60 years successful with children's vehicles

The history of success of Puky goes back to the year 1949, when the department "Puck children's vehicles" was founded within the Schlessmann GmbH in Düsseldorf. In 1950, the independent company "Puck GmbH Fahrzeugfabrik" originated from the production of scooters and children's bikes at first and later on tricycles and GoKarts as well. The same year, the company presented its first scooters at the toy fair, a children's scooter with smooth run. The pneumatic tyres were new - they were much more comfortable and more sturdy than the full-rubber tires, which were used until then. Due to the nominal similarity to the branch-related Austrian manufacturer „Puch“, the word brand was named Puky in 1956 - a name which stands for quality playing vehicles until today. Due to the increased request, Puky moved its production from the place of foundation in Dusseldorf to the Rhenish Wulfrath in 1958, two years later the headquarters as well. In 1965, the one-millionth Puky children's vehicle left the factory. The independent sales and production companies were merged to the Puky GmbH & Co. KG in 1997.

Nowadays, Puky employs more than 100 own employees as well as more than 400 persons at workshops for adapted work, which are responsible for the professional final assembly of the playing vehicles. This cooperation allows Puky to produce exclusively at the local Germany.
Fitness equipment
test personally on site - now!
67x in Europe